In linux spaces are not recognized, so if you type it with spaces. The work around is to put double quotation in the file name:

3. Adding fortune and cowsay in Bash 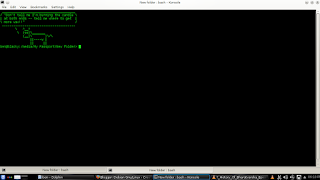 My short review on Debian 8.1 [Jessie]

Debian released it's much awaited release of Jessie featuring SystemD as the new default init system. SysV init still available as a choiche though. I tried  both GNOME and  XFCE.
I was once a fan of gnome as it was fast and very responsive compared to KDE at the time of  Debian 5 and  when gnome3 was released after trying it, i hated it because it moved away from traditional desktop and it was hard to use as a desktop and so I switched to XFCE  but in jessie both  Gnome and Debian developers  brought a way to bring the traditional desktop using the Gnome shell extension and  I must say it was good to have the traditional desktop back. Compared to the previous debian release the implementation of Gnome in this version is good.
XFCE is traditionally geared towards older hardware. Let's just say XFCE can be just as awesome as GNOME or KDE while keeping the memory low and can have both Qt and GTK apps working well seamlessly. well I'm not going delve into what software version is in and what not but i'll  tell you what my experience is. Software for daily needs are in GNOME and for XFCE some of the software  may have to be installed from the debian repo.
One thing that irritated me the most was IBus implementation in XFCE  because XFCE doesn't have native support to ibus compared to gnome and kde  only after an couple of hours of google searching and after many attempts could i implement the ibus in XFCE. Another thing is the mounting of NTFS partions it requires a password for mounting it for every session I think it's nothing but a hassle on desktop users who are the only users on the system.
Finally it's about SystemD, I read the discussions in the mailing list both for and against it.I personally feel that those who against it, have two specific  valid points such as binary logging and mission creep. I don't have the requisite knowledge about how operating system works, etc ,etc i hope you get the picture.The SystemD developers say binary logging can be turned off  which is true by the way but the second point "Mission creep" is certainly valid. Because SystemD surpasses what an init system should do. There are lot of website that deals with SystemD on how to avoid it and there are also proponents of  SystemD. In the debian implementation it certainly did offered an faster boot and faster shutdown.But never during the time of using Debian did I ever have an system freeze like windows or had to reboot after an update like in Jessie, certainly this is irksome.
All in all Debian Jessie gives back what it promises a stable desktop for a production machine. I thank the Debian developers and maintainers for giving the community an another  rock solid distro.

P.S: 1. Debian developers may look into UselessD a stripped down version of SystemD for default init which may be acceptable for the Debian community.
2. You may think i harbor a grudge against KDE but it's not the case also i've also not mentioned both MATE and Cinnamon because i've not tried it.
3. Debian implementation on KDE definitely needs some improvement based on my previous experience of it. If you compare  slackware KDE  or openSuse KDE with Debian KDE then any sane person would agree that there is still room for improvement in Debian KDE.
Posted by ben at 7/20/2015 11:17:00 PM No comments: Links to this post